Richard is watching a film, 'Searching for Sugar Man', Adam is still in the shower and I'm so fresh and so clean. Our room is lovely- three double futons with Adam up in the mezzanine- he gets first dibs on beds, being the driver an' all.

We're here tonight as well, and to be honest we couldn't have asked for a nicer place to start. The venue, Cafe Nun, is a non-profit cooperative run by a group of people not so different from my own group of friends- it just seems that the laws around licensing are much more lenient here. They have a flat upstairs where Anna, our host, lives. When we arrived yesterday at about two, we couldn't get in to the venue so went for a walk around the block, which was totally dead!

So we were tired and grumpy- Adam and rich went back to the car and had a kip whilst I walked around the city and successfully ordered some food in German. It's a nice city-with trams and a really unique layout based around a castle.

When we got into the venue, we met the lovely staff. Anna, whose flat we were staying in, Dennis, who set the venue, Wolfgang, who provided the sound and Daniel, web designer/barman who translated every word we said on stage to his seven year old son who was attending his second ever concert.

After a good soundcheck we went up the the flat to chill out- We also ate an amazing Thai green curry cooked by Anna!. Skype calls were made, sleep was had and soon enough it was stage time for Adam.

When we made our way downstairs we were dumbfounded- the venue was rammed. We were later told it was fully sold out and people had been turned away. This, whilst being a good thing, was also incredibly nervewracking as the stage was set in the middle of the floor, meaning we were surrounded 360 by the crowd.

Adam went first, and the crowd fell silent, taking it all in. The crowd were incredibly respectful of the music- and Adam was a star in Karlsruhe by the end.

When we played the same thing happened- I really cannot express how quiet it was. The set went well- and Richard did 2 encores culminating in a cover of the Longpigs. It seems that Germans have a very unique style of clapping- as if each person is paying attention to the person clapping next to them and trying to clap in time, giving it a very rhythmic feel.

Afterwards we sold a LOT of merch. Too much to count, and buoyed by a second wind, stayed up chatting until 1am. Then our eyes were closed as soon as our heads hit the pillow.

Today we hit the city! Woke and had a lovely breakfast- then hit the city. We went to ZKM- a multimedia museum- see the pictures below. This place was amazing. They were pumping Brian Eno/harmonia's 'by this river' into it! And tvs were splitting out mad visuals with soundtracks that sounded like outtakes from a 70s Can record. We played vintage computer games and watched a man travel round a virtual city made of letters on an exercise bike.

Then we went to the palace- a grand old building at the centre of Karlsruhe- huge. Much like a British stately home, before Adam tried his first sausage.

Throughout the city we saw evidence that Germans are more than at home with puerile humour- we saw a penis and breasts drawn in the snow at least twice, along with the defacement of the below big-cat art-piece.


ADAM BARNES: BEST OF THE WURST

Here follows the first in a hopefully daily section of the blog where Adam Barnes reviews the day's sausage-based sustenance.

"good frankfurter sausages covered a curry sauce- enough sauce great for chip dipping" is what he says. Adam marked this particular sausage based meal a satisfactory 3/5 and will be hoping for more from schweinfurt, where we're playing in a sausage restaurant. You can see a picture of Adam with his sausage (no, not that one!) below.

Who knows what this evening holds! We're relaxing now as we're on our way to Switzerland tomorrow. Winterthur, here we come! 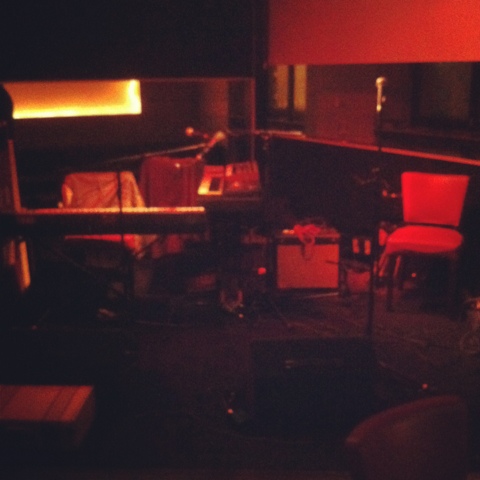 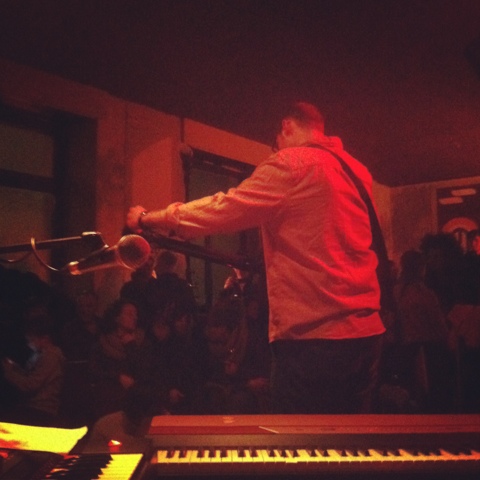 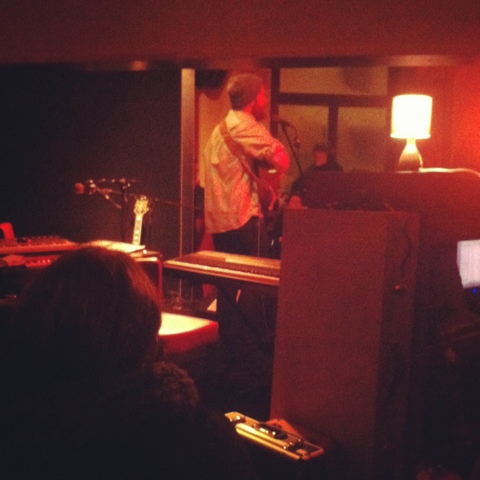 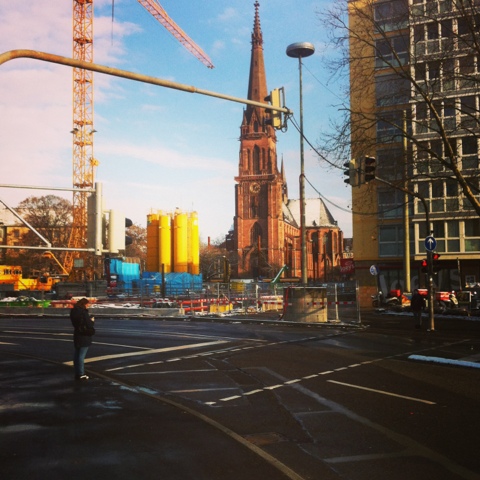 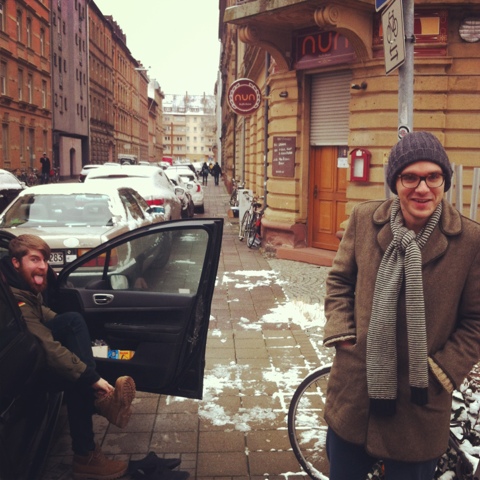 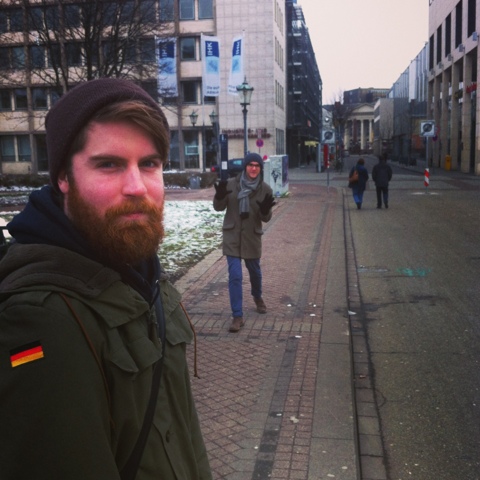 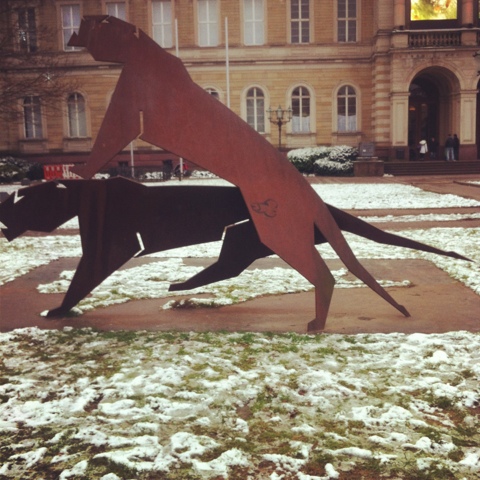 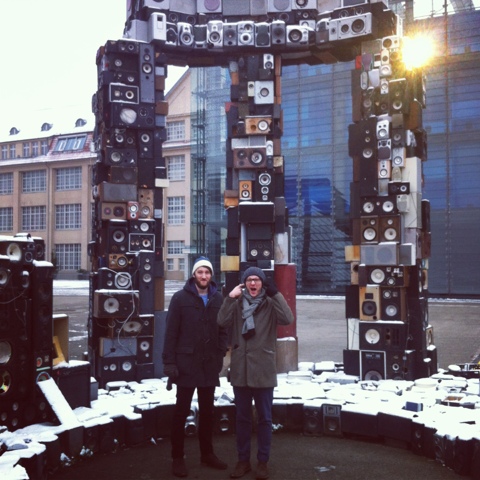 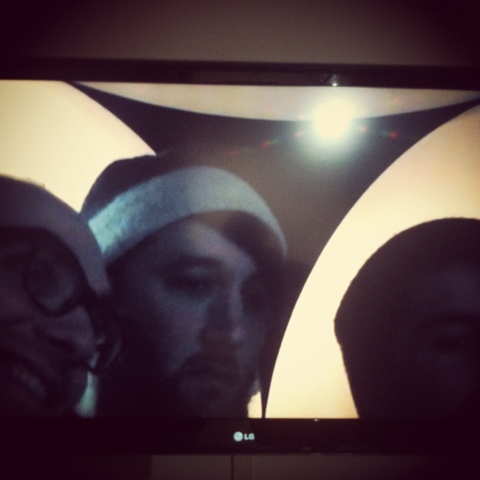 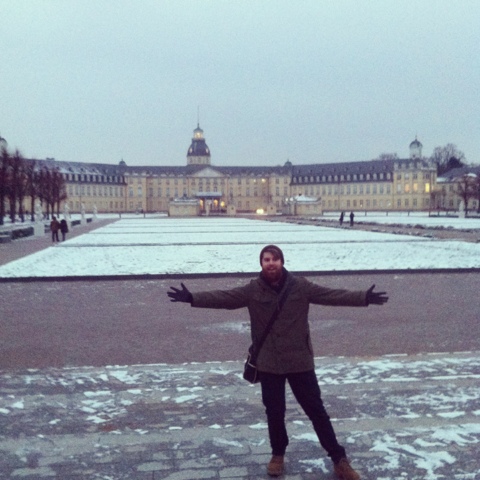 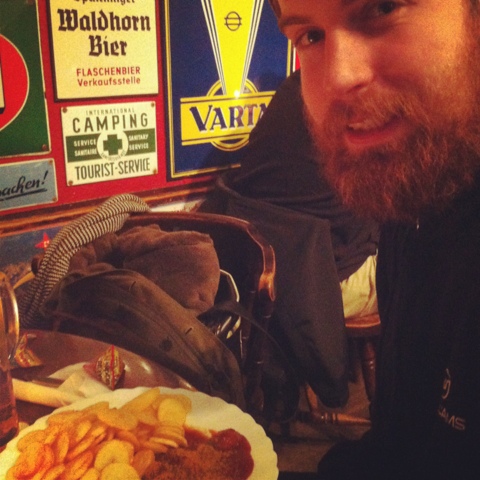 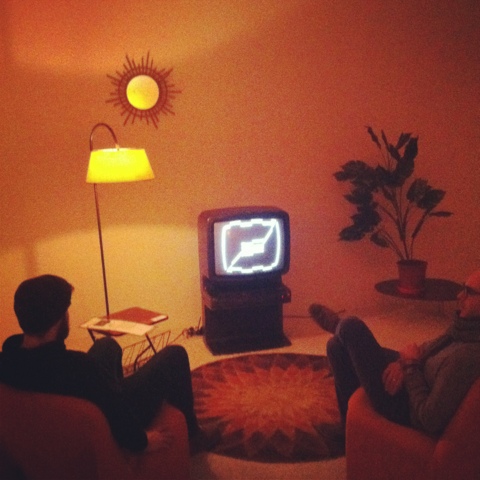 Posted by Benno von Archimboldi at 03:28

Benno von Archimboldi
Graphic representations of a tour of Germany/Switzerland and the Netherlands as part of the backing band of Richard Walters.